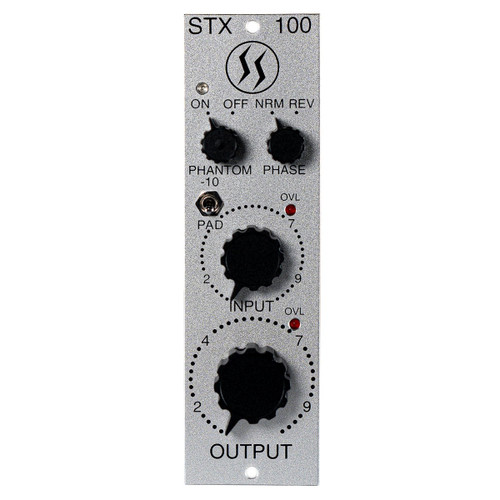 The Spectra 1964 STX100 Mk2 500 Series Preamp is a compact, affordable 500 series version of the classic Spectra 101 amplifier circuit—the same discrete preamp design used in the original consoles from the 60s. The STX 100 features an expanded dynamic range, reduced self noise and distortion, and enhanced harmonics for unparalleled performance.

With an impressive 64 dB of gain and an extended frequency response from 10 Hz all the way up to 50 kHz, STX 100 delivers deep, rich lows and silky smooth highs with unparalleled dynamic range. And with convenient features like a 10 dB pad and continuously variable input and output controls, the STX 100 is versatile enough to use in any scenario—for both mic and line level signals.

Traditional analog preamps measure input signals using program peaks, which can reduce your dynamic range by up to 20 dB, limiting your headroom and potentially introducing unwanted distortion. The STX series measures input signals using a VU system, which is not limited by the transient response of a signal. Drums and other percussion instruments can create transient peaks up to 24 dB above the program material average, which would easily create distortion on a traditional preamp. But the STX 100 uses two stages of independent LED overload indicators to effectively eliminate distortion from transient peaks.

Bring your tracks to life with the new and improved Spectra 1964 STX 100. Capture drum recordings that sound like you’re standing in the room right next to the kit. Record guitars with full, rich harmonics that cut through the mix. Take your vocal recordings to the next level with class-leading dynamic range—capture everything from the quietest whisper to the loudest scream. For even more tonal versatility, the STX 100 preamp is custom designed to integrate with the STX 500 two-band passive EQ module.