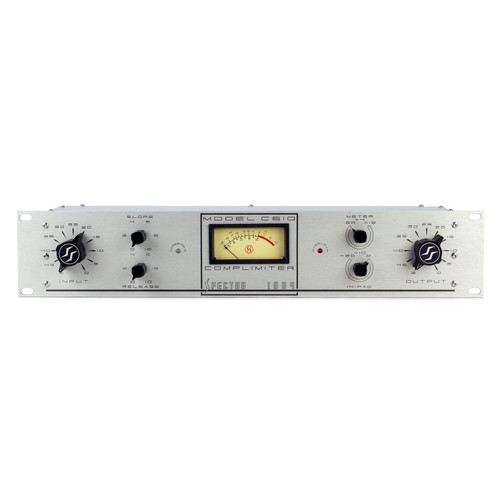 Original Version Of The Classic Compressor And Peak Limiter

In 1969, Spectra Sonics unveiled the Model 610 Complimiter, a revolutionary audio compressor and limiter. Unique to this design was its ability to peak limit and compress audio separately. At the heart of the Model 610 were the 601 Compressor/Limiter module and 101 amplifier circuits. The Model 610’s low noise floor, ultra-fast peak limiting and intelligent compression response made it an incredibly versatile unit and earned its status as a classic studio compressor. For decades the Model 610 could be found safeguarding levels to tape, strapped across the mix bus, and even before record lathes in some of the most well known recording studios in the world.

With the fastest peak limiter in the world and a compression attack time around 100 nanoseconds, the Model 610 Complimiter was the first device of this type to eliminate compression pumping and the need for de-essing, while maintaining full bandwidth at ratios of up to 100:1. In addition, the 610 is one of the few, if not the only device of this type, that rivals the best microphone preamps in terms of noise and distortion. Combined with an input threshold of -40dBu, the 610 offers the user the best of all worlds; peak-free transients, adjustable compression, low noise and distortion, and considerable amplifier gain.

Nearly 50 years after its release, the Model 610 still has specifications that go unrivaled in today’s industry, proving Spectra Sonics founder William G. Dilley was decades ahead of his time. And now, a new generation of engineers is discovering the Spectra Sonics sound for themselves.

From the original Spectra Sonics Model 610 brochure, ca. 1969:
“Spectra Sonics introduces the Model 610 “COMPLIMITER,” the newest proven concept in a rack-mounting compressor/limiter system with performance both measurably and audibly discernable as “beyond state of the art.” This unit performs the functions of peak-limiting and volume-compression, either independently or simultaneously, as a direct function of the type of program input, with performance that is unequaled by most linear amplifiers. The extremely low noise characteristics of this unique, self-contained system provide a very low threshold of -40dBm, thus allowing the greatest input sensitivity and compatibility with audio equipment and accessories used in the professional recording, broadcasting, motion picture and sound-reinforcement industries.

As the fastest of all peak-limiting devices (100 nanoseconds to 2 microseconds), peak-limiting can be employed with no audible distortion of any kind, thus allowing undistorted recordings, transmissions, etc. at average levels significantly higher than conventional “0” VU (+4dBm or +8dBm) while simultaneously providing maximum amplitude protections. A white threshold indicating lamp provides the audio engineer – for the first time – a representation of the peak-limiting taking place without the task of monitoring an auxiliary oscilloscope. A separate red overload indicating lamp forewarns the operator, in advance of overload, exactly when to check his control adjustments without requiring his undivided attention. The continuously variable compression/limiting ratio assures the widest range of slope control available from 1.1:1 (approximately linear amplification) to approximately 100:1 (flat slope, maximum amplitude protection line). Coupled with a constant threshold attack level of -40dBm, the need to continuously reset input levels during operation for each new compression/limiting ratio is eliminated. Variable release time control allows the selection of the smoothest dynamic action commensurate with minimum distortion (typically less than 5/100ths of 1%). The uniform frequency response of this unit negates the need for “de-ess” roll-off on all high frequencies.

During actual listening, the absence of noise, distortion, and frequency discrimination is readily apparent. The Model 610 “COMPLIMITER” is particularly effective in controlling sibilant sounds, restricting extreme ranges, and providing the smoothest dynamic action.”

TESTIMONIALS
“I'm hesitant to disclose to other mastering engineers what a wonderful game changer the V610 is.” - Garrett Haines

“They sound HUGE! I used the hell out of them on the new Jason Isbell record!!” - Dave Cobb

"The 610 has been my longtime 'go to' device for dirtying up drums, parallel compression, and other general 'grit enhancement' tasks. Its ability to pump and overdrive make it perfect for things like that. The 610's not-so-dirty little secret is that, with proper settings, it can also be one of the cleanest, most transparent compressors available. Unique and invaluable. A classic." - Pete Weiss

"Behind me in the rack were mounted two 610 compressors that were a perfect fit across the stereo buss. How I missed that sound. Now, it’s back!" - Jack Douglas