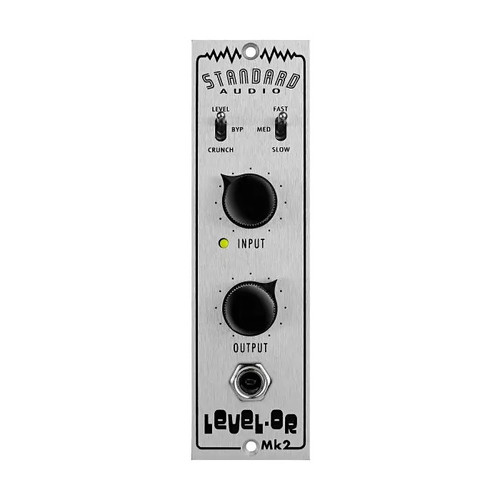 At the core of the Level-Or is the mode switch which lets you choose between Level and Crunch modes. The Level mode is ideal to heavily compress your audio signal thanks to is extreme JFET limiter. The Crunch mode uses a series of Class A amplifier stages with discrete transistors to provide subtle harmonic enhancement or complete destruction of the audio signal.

Another improvement is included with the speed switch which now offers a choice of three release times (SLOW/MEDIUM/FAST) instead of two (SLOW/FAST) and the ability to control a three-way low-pass filter on the output stage. This new function is useful to minimise harshness that can occur while distorting. It offers a choice of two frequency points of between 15kHz in MEDIUM position and 8kHz in the SLOW position while it remains bypassed when set in FAST mode.

A DI input has also replaced the original Line in level making the Level-Or mk2 much more useful for guitarists and bassists. When a ¼” jack is connected to the input, the unit automatically switches to DI Mode. In this mode, the Bypass function sends a Clean DI signal to the output and can be boosted with the output level control.

NEW AND IMPROVED CONTROLS AND FEATURES:
Lower Noise – Due to the aggressive nature of the circuit, a common issue with the
original Level-Or was the noise present in Level mode. With extensive R&D and listen testing,
we found a way to lower the noise considerably while remaining true to the tone and vibe of the original circuit. As a
result the Mk2 noise floor is 12-15dB BETTER than the original Level-Or.

Mode Switch – Switches between Level, Crunch, and Bypass modes.
- Bypass Mode: We have included a relay based true-bypass.
- Level Mode: Sound of the unit is dominated by an extreme JFET limiter. Use this mode to slam, squash, and pummel your audio signal.
- Crunch Mode: Sound of the unit is dominated by distortion generated from a series of discrete transistor based, Class A amplifier stages. Use this mode to provide subtle saturation and harmonic enhancement all the way to heavier distortion and outright destruction of your audio signal.

Speed Switch – Formerly, the speed switch provides two release times (fast/slow) while in Level mode, and was un-used in Crunch mode. We have expanded to a 3 way switch and added functionality that changes, depending on mode.
- Level Mode: There are now 3 release times, FAST, MED, and SLOW. The FAST and SLOW settings are the same as the original, with the added medium time constant in between.
- Crunch Mode: The speed switch now controls a 3 way low pass filter on the output. This can be very useful for reducing harsh, higher harmonics while distorting. When set to FAST, the filter is bypassed. When set to MEDIUM, the LPF is 15kHz. When set to SLOW, the LPF is 8kHz.

Instrument DI - The original Level-Or had a line input via a front panel 1/4” jack. While useful for interfacing with a drum machine or synthesizer, it was not useful for guitar, bass, or any other instrument level source. On the Level-Or Mk2, we have changed this to an instrument-level DI input.

DI MODES
- The unit detects when a 1/4” jack is inserted and switches over to the DI input.
- DI Bypass Mode: When the DI is used, putting the unit into Bypass mode sends the clean DI signal to the output of the unit. The unit functions as a clean DI with gain, no external amplifier required. The output control is active to adjust level as needed.
- DI Crunch Mode: The DI signal is sent through the input gain stage and all controls work as normal including the filter switch.
- DI Level Mode: The DI signal is sent to the limiter and all controls work as normal.
*It is possible for the user to configure the front panel 1/4” input to be configured as a line input if desired.

After delivering over 1,000 original Level-Or modules out into the world, the reliability of the design has been incredible. The Level-Or Mk2 ANNIVERSARY EDITION follows the same robust design approach and attention to detail

What people are saying about the Level-Or?

WHAT U HAVE TO SAY:“OK… so we love this thing here! It’s been seeing use on snare, vocals, guitar, and room mics. It’s really improved and the fact that it is so quiet is marvelous. I must say it is amazing how useful it is because of the changes and being so quiet now. It has been crushing it on bass direct!” -Jacquire King “The MK2 sounds awesome. Fixed the noise floor issue and the added release times and functional upgrades make it easier and more fun to use. You've given me even more ways to mangle stuff! It's a significant improvement on the original.” - Ryan Hewitt “Wow, I love this... so much cool and so little noise... Love the low pass in the crunch mode, nice for adding that “thing “to the snare while not making it too hyped. All around a great upgrade! Great job! You made something great even greater!” - Vance Powell “I love the MK2 - It keeps everything I love about the original while lowering the noise and the additional options open up all new sounds. The new instrument DI sounds killer on synths and I love the additional release options, but most importantly it now matches my Stretch units! It’s really awesome.” - Billy Bush "New Level-Or, same as the original but better, quieter, more flexible, and most importantly sounds a bit more controlled and dare I say HIFI! More useful on more sources than the original. Dig it!" - Jason Livermore "The Level-Or is just the most incredible thing for drums! It adds so much attitude every time I use it. Easily one of the best things ever for drum room mics! I was a big fan of the original but they've somehow managed to make the Level-Or MK2 even better! - Romesh Dodangoda