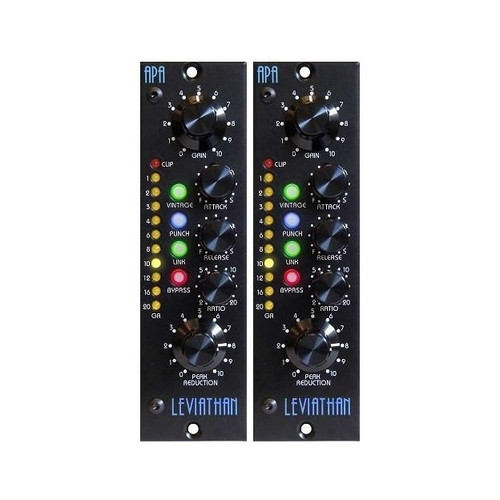 500 series lovers, your wish has come true. APA's new Leviathan compressor is the perfect synthesis of vintage and modern technology. Inspired by both the La-3a AND La-2a 'set and forget' program dependent compression with the Leviathan's VINTAGE auto mode, the APA Leviathan is very smooth in every sense of the word. We've set the VINTAGE mode's attack to be approximately in between the La-2a and La-3a so the source is natural but with enough control to keep things in check. Being a discrete Class A single ended design with iron core transformers on input and output, the perfect balance of coloration and detail is achieved with a solid midrange, airy top and just the right amount of even order harmonic distortion. The Leviathan's smooth compression is similar to 'riding the fader'.

In addition to having the VINTAGE auto mode, the Leviathan has fully featured modern features such as variable attack, variable release, variable ratio, PUNCH low frequency side chain for keeping your tracks fat in the low end. These modern features make it far more flexible than any vintage based design in the 500 format. Because it can be closely stereo matched and stereo linked it can used with great effect on master bus, sub bus, vocals, acoustic guitars, bass, drum overheads, synths, electric guitars, and more.