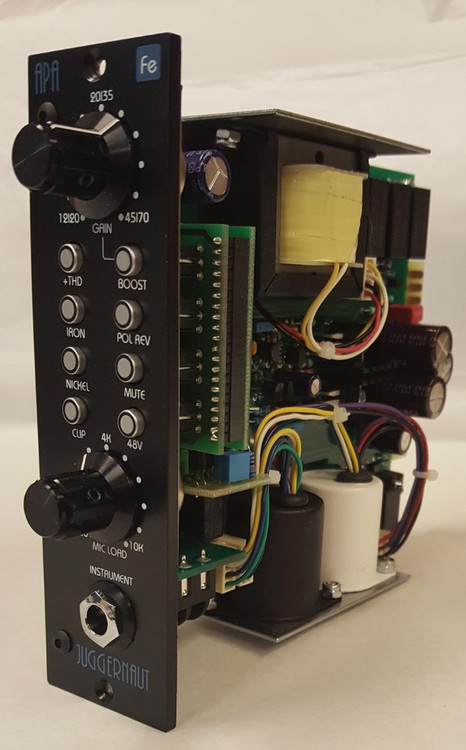 THE JUGGERNAUT 500 FE is an all Class A discrete, transformer coupled 500 series preamp by APA, designed by Tim Farrant and Nathan Eldred.

The Juggernaut 500 Fe features custom wound iron and nickel input transformers (switchable via push button), and comes with an iron core custom output transformer. When switching between input transformers the auto-mute function engages to prevent loud pops or damage to speakers. Manual mute is also selectable. Pushbutton LEDs light up when selected. The Juggernaut is electronically discrete and fully class A; no opamps, no chips. Fully API (tm) compatible.

The Juggernaut was designed to be the ideal multi-tasker in the studio for any application. It is the first 500 series preamp that can provide a staggering range of tonal choices and control, through the use of switchable input transformers, widest choice of selectable impedance settings, onboard instrument DI, high-quality detented gain and impedance knobs for repeatibility and stereo matching between multiple Juggernauts, and much more. The incredible amount of features packed into a single 500 series slot is unprecedented.

Some other unique features include "Boost" and "+THD". Boost control button lowers or raises the sensitivity of the INPUT to avoid the typical negative -20dB pad found on many preamps which effects the tone. The +THD button is -10dB OUTPUT pad which will allows slight saturation of the transformer.

The Juggernaut has a wide selection of impedance settings ranging from 300 to 10,000 ohms this feature acts like a "tone control" knob; going beyond the traditional idea of mic impedance matching with microphones. The lower settings allow for low end emphasis in the source, while the higher settings allow for a distinctly open and extended full range frequency response. The Juggernaut provides the utmost flexibility and freedom of choice.

"tones ranging from sweet purity to velvety saturation. Thoughtful features and ergonomics make the Juggernaut a joy to use. Any studio would benefit from having a Juggernaut or two, but the preamp's sonic versatility makes it a serious contender for anyone looking for one preamp that does it all... there's no doubt this is one great product." - Michael Cooper

The Juggernaut is a single-channel, Class-A, fully discrete preamp module. It is designed to be powered by any API 500-compatible housing or in Atlas' Revolver rack, which can fit two Juggernaut modules. Slide a Juggernaut into one of the Revolver's two slots, secure two front panel screws, and you're good to go. The Revolver's rear panel provides latching XLR I/O for each module, a power switch and an IEC AC cord.

Juggernaut's main attractions are push-buttons that switch the audio path between iron- and nickel-input transformers, changing the timbre. Nickel input provides greater bass extension and lower THD, while iron input provides a little more color. A nickel-output transformer can also be installed in lieu of the factory-installed iron one prior to racking the module in the Revolver. This is a simple operation, yet it requires a little manual dexterity. Atlas is providing the nickel-output transformer at no extra charge for a limited time.

A +THD button pads the output -10 dB. Other controls activate 48-volt phantom power, invert polarity, provide up to 25 dB of boost, and mute the unit's output. These switches are thoughtfully designed. When activated, they're backlit by an LED. The mute control is nonvolatile, and the phantom-power switch is turned off on power-up to avoid potential damage to other gear. Even if the mute switch is disengaged, the unit is automatically muted for a few seconds on power-up to avoid a thump. You must press and hold the phantom switch to engage 48V power — there is no risk of unintentional engagement here.

Continuously variable rotary controls for adjusting gain and input impedance are detented for repeatable setups. The latter varies mic load between 300 and 10k ohms. Depending on whether the boost and +THD switches are engaged, gain can be varied between +12 and +70 dB — plenty for use with low-output ribbon mics. You can pad the Juggernaut's output 10 dB while cranking the gain control to saturate the input transformer for more color. A ¼-inch DI jack is also provided on the front panel.

The combination of nickel-input and -output transformers produced gorgeous acoustic guitar tracks, which were miked in stereo with B&K 4011 condensers. Surprisingly, this transformer combo produced a warmer and thicker sound than nickel in/iron out, while retaining sweet sparkle and detail.

When I miked a guitar cabinet with a Coles 4040 ribbon mic, the Juggernaut produced superb electric guitar tracks. Nickel in and out lent a warm, round, clean sound to Strat tracks — great for accurately capturing a guitar tone that was already lush at the mic. Iron-input and -output transformers, on the other hand, added presence and crunch to another guitar that needed extra hair. Simultaneously kicking in the boost and +THD switches grew a beard on the track!

On kick drum using an AKG D 112, nickel in and iron out produced a beautifully defined beater snap and a tight, deep “chest hit.” Switching to iron input brought out the beater snap even more, but the shell resonance wasn't quite as meaty.

Nickel input with iron output on an AKG C 414 TLII was my fave on vocal tracks, lending the perfect balance of size and definition. Iron in and out sounded a tad less defined. Nickel in and out gave the most realistic — albeit more clinical — sound.

The Juggernaut is pricey, but this is no one-trick pony. Loading a Revolver with two modules using different output transformers provides tones ranging from sweet purity to velvety saturation. Thoughtful features and ergonomics make the Juggernaut a joy to use. Any studio would benefit from having a Juggernaut or two, but the preamp's sonic versatility makes it a serious contender for anyone looking for one preamp that does it all. Considering that you can also install another company's Series 500-style modules in the companion Revolver rack, there's no doubt this is one great product.

Me playing the guitar solo from "U Got It Bad" by Usher. One of my favorites! I'm a producer/multi instrumentalist from Tx. Follow me on twitter! http://twitter.com/TremaineReal