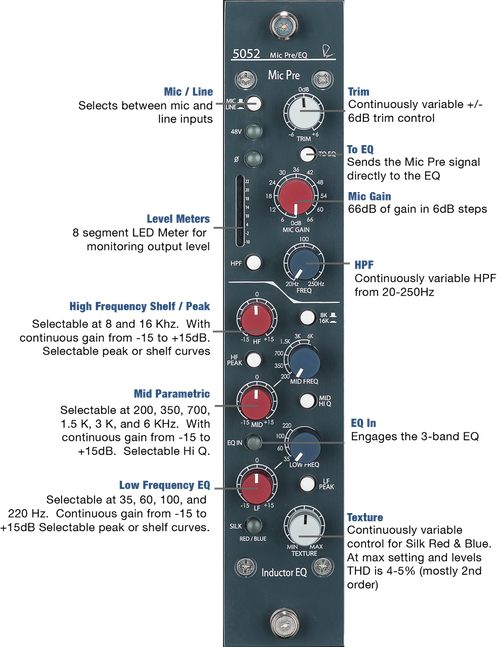 The Shelford 5052 echoes the simple and definitive 1073 feature set with a vertically-oriented mic pre, high pass filter, and 3-band inductor EQ, while also incorporating modern capabilities like the variable Silk / Texture control from the Portico II Series and simultaneous pre / post “tape” operation. Utilizing class-A, discrete, +/- 24V topologies with custom-wound transformers and inductors, Rupert Neve designed the 5052 as a vintage-style channel strip that captures the soul of his classic designs, without the previous compromises.

The Mic Pre
Like Rupert’s designs from his time in Shelford, the 5052 preamplifier has 72dB of discrete, class-A gain coupled with serious square-core transformers. Unlike the classics however, the output transformer features the Silk Red / Blue and Texture controls from the Portico II Series to hone the harmonic content and tonality of the output stage. By engaging these controls and sufficiently driving the output, the 5052 can produce up to 4-5% THD (primarily 2nd order, some 3rd order), bringing a richness and thickness to tracks when desired with no danger of overloading the output stage. With Silk disengaged, the output is modern and pristine, yet still retains Rupert’s signature larger-than-life transformer sound. The mic pre section also includes a sweepable 20-250Hz high-pass filter, Mic / Line selection, 48V phantom power, and polarity reverse.

Dual I/O Paths
Following the preamplifier, the 5052 has a transformer-coupled output, which allows the 5052 to feed a tape machine or DAW directly from the mic pre while still using the EQ and Silk / Texture in a dedicated analogue mix path such as that found with a 5088, 5060 or vintage console. This output can also be used to insert a separate compressor between the mic pre and the EQ, or it can allow the 5052 to work with two separate sources. When the “TO EQ” button is engaged, the mic pre signal is routed directly into the EQ such that the mic / line input signal flows through to the main output as a single channel strip.

The “best of the classics” EQ
The 3-band, custom-tapped inductor EQ on the 5052 was inspired by RND’s favorite portions of Rupert’s vintage EQ designs. The low frequency band is primarily based on the 1064, which is renowned for its creamy, resonant bass. Unlike the 1064 however, the LF band on the 5052 can be used as either a shelf or a peak filter, adding punch, dimension, and immense control to your low end. The 5052’s inductor midrange band is based on his prized 1073 EQ, which is ideal for sweetening vocals and instruments while bringing them forward in a mix. Additionally, the mid frequency band’s proportional “Q” response makes it well-suited for minimizing problematic frequencies in a source. The 5052’s high frequency band is a hybrid vintage / modern design, blending inductor circuitry from the 1073 with capacitor-based topologies to achieve the vintage tones with enhanced control. As Rupert originally intended with his most prized classic designs, each EQ section uses low-feedback, class-A discrete electronics to prevent low-level artifacts and harshness from detracting from the tonal shaping. The EQ circuit itself, however, is a decidedly modern updated design using techniques and components that were simply not available 35 years ago, and should not be considered a “clone”.

Power, Connections and Mounting
The 5052 receives +/- 24V rails from an external DC power supply using a 4-pin connection. There are currently two options available: the RND 5-way brick supply and the RND 25-way 2U rack-mount supply. The back panel of the 5052 includes three XLR-F connections for Mic In, Line In, and EQ In, and two XLR-M connections for Mic Out and Main Out. The 5052 chassis is a “half-rack” format, and can be mounted in RND’s new 2 –way and 4-way vertical racks in addition to the existing 9-way racks and the 5088 penthouse.

Why Transformers?
A complete discussion on transformers is out of place at this point, but it is helpful to review some of the essentials where it will be seen that a design needs to be viewed as a whole, not simply from the point of view of a single component.
The fine subtleties of circuit design relating to sonic performance are gradually becoming more clearly understood. For example, research has shown conclusively that frequencies above 20 kHz affect the way in which humans perceive sound quality. But, long before scientific evidence emerged a substantial body of musicians and engineers knew that equipment with apparently the same technical measurements could sound very different.

Incredibly small amounts of musically dissonant odd harmonics have a disastrous effect on the sound quality. Extraneous noise or interference that finds its way into a signal path seriously impairs performance of the whole chain.

Many control rooms make use of outboard gear that is not well protected from external signals. Poor grounding of such equipment can be a serious problem. “Electronically balanced” circuits much used in modern equipment, can give very good measurements on the test bench but they do not provide adequate rejection of the stray fields found in every working environment.

Input and output circuits must be freed from ground dependence so that only the “wanted” signal enters and leaves the processing path. Transformers are the ideal solution. The sweet and silky sound of my classic old favorite consoles was achieved with big transistors and large high quality transformers. Rupert Neve Designs Portico modules achieve similar quality today without the bulk or the cost.

In order that modules can work together as would be expected (i.e. in a proprietary console configuration) without producing hum, R.F. interference, or other interactions, the connecting interfaces, grounding, levels and impedances must receive careful attention. Each of our Shelford modules is a complete integral signal processor that delivers its specified performance independently. This is one of the reasons we use transformers.

SILK / TEXTURE
Pushing the Silk button cycles the silk modes from red silk to blue silk to off. Silk reduces the negative feedback on the output transformer, adding harmonic content as the texture is increased. Red Silk accentuates the saturation in the mid and high frequencies, similar to that of the red silk mode on the Portico II Channel. Blue Silk accentuates low frequencies. By manipulating the Texture control, the amount of Silk can be changed from essentially absent, to roughly 4-5% THD (mostly second order) depending on how hard the output transformer is being driven.


POLARITY
Push button inverts the polarity of the signal path, and illuminates when engaged. The symbol “Ø” is often used to denote opposite polarity.

HIGH PASS FILTER
The high pass filter is continuously variable from 20-250Hz and engaged by the HPF switch, which illuminates when engaged. It is a valuable aid in any signal chain, but particularly so in a microphone preamplifier. Signals below the selected frequency are attenuated at a rate of 12db / octave, getting rid of proximity effect, building rumble, air handling, motor hum, etc.

LEVEL METER
An Eight-segment LED bar-graph meter displays output level (pre-Silk). The color range proceeds from green for lower level signals, yellow for intermediate signals, and red for high levels. When the 5052 is clipped, the highest red LED will hold longer depending on how far above the clip threshold the signal was.

The 5051 is intended for 5088 consoles or 5285 vertical frames. There are two +/- 24V power supply options; The 5-way supply is designed to sit in the bottom of a rack, and the 25-way supply is a 2U enclosure. The external +/- 24V supply provides exceptionally clean power, and reduces heat build-up within modules associated with DC-DC up-conversion.

We sell a 2 space rack made by Rupert Neve Designs, and we also sell the two different size power supply, these items are sold separately.