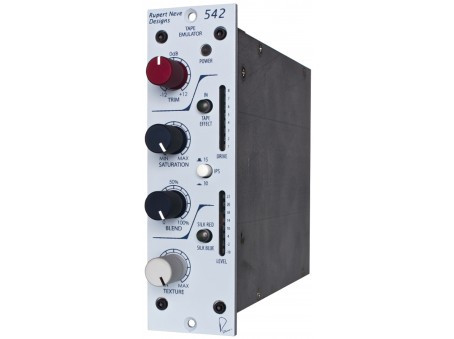 The ultimate “color box”. As a 500-series follow-up to the Portico 5042, the 542 delivers the same thick, musical simulation of tape while drastically enhancing creative control via a number of new features. In addition to the the “true tape” circuitry – great for bringing out 3rd-order harmonics – the 542 incorporates a soft-clip circuit that tames the harshest sources and enhances 2nd-order harmonics, a variable and versatile Silk/Texture circuit for three transformer tones in one, and a wet/dry control to blend in the perfect amount of saturation.

Unlike digital emulations, the “True Tape” drive circuit works by feeding a custom-designed transformer acting as a “record head”, which in turn is coupled to a correctly equalized replay amplifier. As the voltage rises on the “record head”, saturation increases, and a soft clip circuit engages at higher levels to round off peak transients. The sound of the tape circuit can be further modified with selectable 15 / 30 IPS modes and a pre/post-tape blend control. In addition to the tape circuit, the 542 also has the variable Silk & Texture circuitry found in the Portico II series of modules, which allows the engineer to fine-tune the harmonic ratio and tonality on the output transformer.