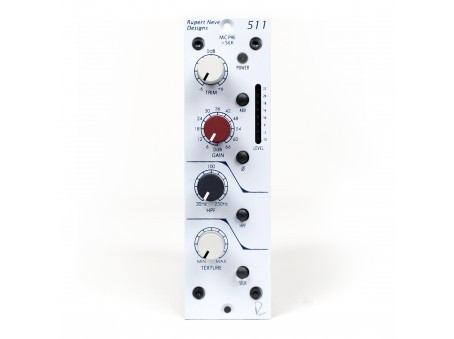 With a big, bold preamp and the flexibility of variable Silk/Texture, Rupert Neve designed the 511 to combine classic sonics with 500-series value. Incorporating the 517’s powerful preamp, the 5012’s universally useful sweepable high pass filter, and the transformer-saturating power of a variable silk circuit derived from our flagship Portico II Channel, the 511 is a Rupert Neve-designed micpre for the masses.

A 12-way precision rotary switch controls gain from 0 to 66 dB in 6 dB steps.

Engages phantom power on the microphone input, as supplied by the 500 series rack.

Push button inverts the polarity of the signal path, and illuminates when engaged. The symbol “Ø” is often used to denote opposite polarity.

The high pass filter is continuously variable from 20-250Hz and engaged by the HPF switch, which illuminates when engaged. It is a valuable aid in any signal chain, but particularly so in a microphone preamplifier. Signals below the selected frequency are attenuated at a rate of 12db / octave, getting rid of proximity effect, building rumble, air handling, motor hum, etc.

Pushing the Silk button engages the red Silk circuit, which reduces the negative feedback on the output transformer, adding harmonic content as the texture is increased. Red Silk accentuates the saturation in the mid and high frequencies, similar to that of the red silk mode on the Portico II Channel. By manipulating the Texture control, the amount of Silk can be changed from essentially absent, to roughly 10 times the amount of coloration / distortion found in Silk from the original Portico Series. With Silk / Texture engaged, the distortion characteristic and harmonic content of the unit are very reminiscent of many of Rupert’s class-A vintage designs.

An Eight-segment LED bar-graph meter displays output level (pre-Silk). The color range proceeds from green for lower level signals, yellow for intermediate signals, and red for high levels. When the 511 is clipped, the highest red LED will hold longer depending on how far above the clip threshold the signal was.