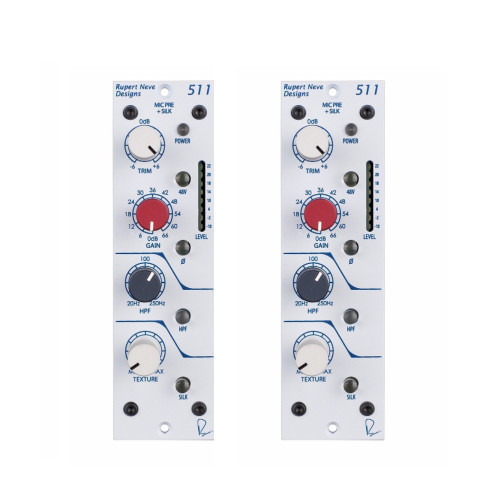 With a big, bold preamp and the flexibility of variable Silk/Texture, Rupert Neve designed the 511 to combine classic sonics with 500-series value. Incorporating the 517’s powerful preamp, the 5012’s universally useful sweepable high pass filter, and the transformer-saturating power of a variable silk circuit derived from our flagship Portico II Channel, the 511 is a Rupert Neve-designed micpre for the masses.

Rupert Neve: “While creating functional 500 series modules is relatively simple, designing those modules to equal their non-500 series counterparts with the current, voltage and space restraints is quite challenging. In creating our own 500-Series Modules, we experimented with a number of different transformer and circuit designs to achieve the same presence and sweetness found in the Portico Series of modules. The result of these efforts is that outside of the slightly lowered headroom, our 500 series modules are nearly indistinguishable from standard Portico Series modules, and are perfectly suited for studios of the highest caliber.”