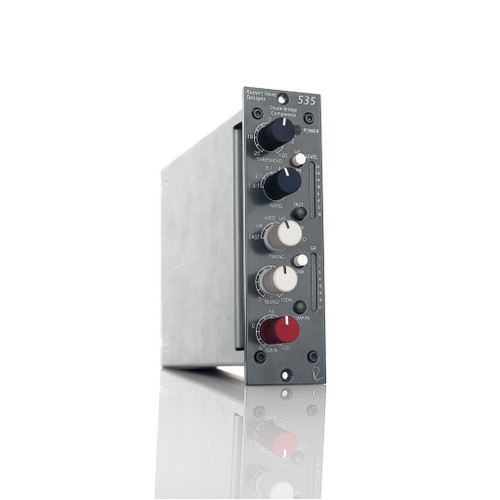 Almost 50 years after Mr. Rupert Neve created his first diode bridge compressor designs, the 535 reimagines the larger-than-life personality of these classic circuits with new levels of precision and adaptability, helping virtually any track shine through a mix.

The Diode Bridge
Where the VCA compressor found in the 543 and Master Buss Processor provides unmatched clarity, the weighty, harmonically rich tonality of diode bridge compression can be essential in pushing key sources like vocals, electric guitars, bass and drums to the forefront of a mix. Mr. Rupert Neve’s original diode bridge compressors like the 2254 served as an inspiration for the design of the 535. By understanding the limitations of the original 2254 topology, painstaking effort was taken to reproduce the unique tone of the 2254 while improving the noise floor, expanding inflexible time constants, adding full wave sidechain detection for improved dynamic response, widening the range of threshold and ratio controls, and raising the headroom of the diode bridge itself. Delivering the powerful sound of these classic designs with enhanced flexibility for the modern age, the 535 is a dynamic tool equipped to make a statement on virtually any track.

Timing is Everything
The unified TIMING control is comprised of six selectable settings, carefully chosen for different applications – a major departure from the fixed attack of the 2254. FAST and MF settings are designed to help clamp down on more transient signals like drums, plucked string instruments and fast vocals. MED and MS have slightly slower attacks and releases which can allow more transients through while having a slightly longer recovery. Lastly, SLOW and AUTO are both significantly slower, and are designed for smoother level control.
FAST mode increases the speed of both attack and release for each setting, effectively doubling the number of time constants from 6 to 12. The FAST mode also allows for a dramatic increase in speed as compared to the 535’s renowned ancestors, providing significantly more tonal & operational versatility.

Faster TIMING settings will generally lead to higher peak-to-peak control voltage ripple, and therefore induce more harmonic content, translating into more color in the main audio path. Slower TIMING settings will smooth the control voltage significantly, and thereby reduce the harmonic content added to the audio path, resulting in more transparent compression. It is also worth noting that due to the nature of this topology, these time constants adapt themselves slightly depending on several factors: compression ratio, threshold, and source material. This dynamically generated timing shift and harmonic content is what gives the Diode Bridge Compressor its unique personality.
The Right Blend
Given the naturally colored sonic signature of the 535’s diode bridge, this built-in parallel compression ability is especially useful. The BLEND control allows the user to inject smaller amounts of extreme compression into an otherwise unaffected signal, creating an enhanced yet natural sound that maintains dynamic range with blendable color and punch.

Take Control
In addition to the TIMING control, the diode bridge compressor can be further manipulated by the RATIO, THRESHOLD, GAIN, SC HPF and LINK controls.  The RATIO control has six selectable positions on the rotary switch and allows the user to set the slope of the compressor curve, with pre-selected ratios of 1.5:1 through 8:1. The THRESHOLD control has 31 detents and allows the user to adjust the point at which compression begins, ranging from -25dBu to +20dBu. The GAIN control has 31 detents to add make-up gain ranging from -6dB to +20dB. The S/C HPF is 12dB/octave sidechain high-pass filter with a frequency set to 150Hz. This feature can be immensely useful for making the compressor respond less to the powerful – and often more sustaining – low frequencies in a mix or instrument, which may otherwise give the compressor a more “mushy” response. LINK is designed to utilize the 500-series link buss built into many 500 series racks like the R6 or R10 (check your rack’s manual for details). When both units have link engaged and connected, the control voltage is shared between them – so when one unit is triggered, it will trigger the other unit equally. This can often help maintain a solid center image in a stereo source. Note: for stereo sources, it is always worth auditioning the “unlinked” sound as well, as linking can sometimes clamp down on the effective stereo width when the compressors are triggered by one side.

Features:
Threshold
A 31-position detented pot that sets the level at which compression begins, from -25dB to +20dB. Turning this control counter-clockwise will increase the amount of compression; turning it clockwise will decrease the amount of compression.
Ratio
The RATIO control has six selectable positions on a rotary switch, allowing the user to set the slope of the compressor curve with pre-selected ratios of 1.5:1 through 8:1 for levels above the determined THRESHOLD. This range of compression ratios allows the user to compress as moderately or heavily as desired.
Timing
The TIMING control is a six-position rotary switch that sets the compressor attack and release times. The timing can be further modified by the FAST button.
FAST – Fast Attack (750us), Fast Release (130ms)
MF – Medium Attack (2.25ms), Fast Release (130ms)
MED – Medium Attack (2.25ms), Medium Release (400ms)
MS – Medium Attack (4ms), Slow Release (725ms)
SLOW – Slow Attack (10ms), Slow Release (1S)
AUTO – Medium Attack (5ms), Dual Decay Release (T1 500ms, T2 1s)
Fast
The FAST switch divides the attack and release times available on the TIMING control in half, effectively doubling the number of TIMING presets available to the user.
Blend
The BLEND control has 31 detents and allows the user to mix the uncompressed (dry) signal with compressed (wet) signal. Turning the control towards 0% will shift the mix to fully uncompressed dry signal, whereas turning the control towards 100% will shift the mix to the fully compressed signal. This feature allows for parallel compression, enabling a wider range of compression subtlety.
Gain
The GAIN control has 31 detents and allows the user to add make-up gain to the compressed signal in order to bring its level back up to unity with the uncompressed input signal. It is much easier to evaluate the tonal effect of the compressor (via the COMP IN switch) when the compressed output level is matched to the uncompressed input level, thereby eliminating potentially misleading level differences.
Comp In
The COMP IN switch allows the user to audition the compression. By disengaging the COMP IN switch, the compressor is bypassed and the user can quickly compare the compressed sound to the dry input signal for an objective evaluation of the compressor’s sonic effect on the audio signal. COMP IN can be used in combination with the GAIN control to match the perceived level of the compressed audio signal with the level of the uncompressed input signal.
Link
The LINK switch allows the compressor to be linked to another 535 compressor module via a sidechain control voltage. In link mode, the compressor generating the greater sidechain voltage (resulting in higher amounts of compression) will control the compression of both audio signal paths to maintain proper stereo center image while compressing. Note: it is advisable to always audition the unlinked sound as well, to decide if the benefit of a constant stereo center image is worth the potential trade-off of reduced left / right independence in the stereo field.
Sidechain HPF
The S/C HPF switch allows the user to insert a 12dB/octave 150Hz high-pass filter in the compressor sidechain. When this filter is engaged, the compressor will be considerably less responsive to information below 150Hz. For example: if used on a drum kit, the low end of the kick drum would have less proportional effect on the compression than a snare drum or cymbals, since a significant portion of the kick drum’s dynamic energy is focused below 150Hz.
Level and Gain Reduction Metering
These two LED meters provide accurate representations of both the output level of the compressor and the amount of gain reduction being applied to the input signal.