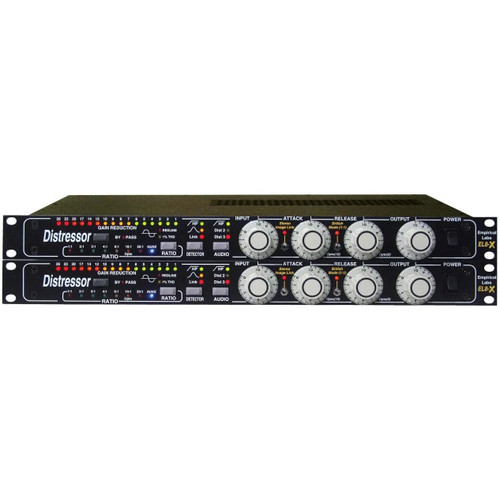 For many Distressor owners, one is never enough - in fact, one extremely successful engineer has twelve of them!  For those who want (at least) a stereo pair, ELI offers the EL8-S, a pair of Distressors that are matched at the factory, and come with the cables you need to lock them together.

The concept of British Mode came from an unusual setting on the classic UREI LN1176 limiter. The unit was designed to have only four ratios, each ratio being engaged by selecting one of four buttons. However, as early as 1980 (or before), renegade recording engineers, always on the lookout for something a little more “over-the-top”, found that you could make all four buttons stay in if you pressed them just right. What resulted was a very aggressive sound that had some elements of the unit’s 20:1 ratio, but with an unusual knee and new envelope shape. Somewhere along the line, someone called it “British Mode”, and the name stuck.

The EL8-X has the advantage of being able to selectively apply this aggressive characteristic - not just to the new “British” ratio (1:1) - to any of the ratios, simply by engaging the dedicated “British Mode" switch.

The original Distressor stereo link function used a summing and phase detection method, which allowed slight stereo image shifting.  Although frequently desirable for its phase correction, and its “thickening” on open room mics and other stereo sources, this approach can sometimes be a problem on stereo program material where the producer/engineers want to maintain absolute left/right balance at all times. With the new “Stereo Image Link” option, the EL8-X now has three link options - the original “phase” link, the new Image Link and the combination of the two, phase and image linking - something never before offered on any compressors or limiters.

The Distressor is the product that started it all for Empirical Labs. Born of founder Dave Derr’s love of classic compressors like the 1176, LA-2A and Gain Brain (among others), the Distressor incorporates his favorite sonic characteristics of these, along with other unique and interesting features that have made it a staple for audio engineers all over the world.  With over 28,000 units in the field, it’s safe to say that the Distressor is one of the best selling high end compressors of all time...if not THE best selling.  A prominent recording engineer recently wagered that there probably was not a top 40 record made in the last five years that didn’t have at least one Distressor on it.