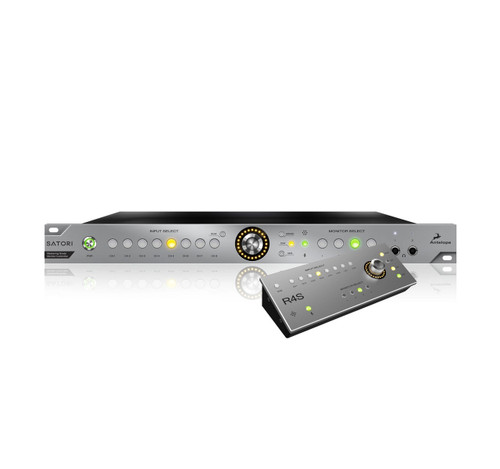 Satori is a digitally-controlled true analog monitoring and summing system designed for today’s studios. Antelope’s Orion32 and Zen Studio interfaces have both been praised for their digital clarity, while maintaining the realism of analog sound. Satori features the same high level of uncompromising sound quality thanks to advanced analog circuit design.

An abundant number of I/Os
Satori provides a generous amount of connectivity options. No other 1U monitoring system has eight stereo inputs and four stereo outputs and features such a comprehensive choice of connections: XLR, 1/4” TRS and D-Sub 25. Satori also boasts a subwoofer output and four 1/4” independent headphone outs

Analog sound with with flexible remote control
Switching and adjusting inputs and outputs, assigning headphone monitoring for the artists and even talkback, is now possible from anywhere in the studio. This is all achieved due to the Satori's elegant front panel, software control panel, ergonomic remote control and now a mobile application.

Flexible and accurate control capabilities are made possible by Antelope’s next generation of software control panel technology, which has opened the door to a whole new generation of analog devices, such as the Satori Monitoring System and MP32 32-channel mic preamp. For Satori this means fast and responsive source and speaker output switching, accurate remote volume control and also Mute, Mono, Dim, Mid/Side monitoring.

Satori is bundled with a bus-powered remote control – R4S. The remote is specially designed for Satori, completely replicating the front panel functionality. It provides engineers with ease and ergonomics, controlling Satori directly from the mix position. R4S allows for lightning fast control of all sources and monitors, as well as talkback.

Satori also comes with a free mobile application available for iOS and Android mobile devices. The intuitive app turns your smartphone or tablet into a professional remote control for your monitoring system. It completely manages Satori’s entire functionality, giving the producer the comfort of having fast and easy monitoring control at their fingertips.

Antelope's flexible software architecture allows you to have multiple mobile devices connected to the same Satori. This provides artists the opportunity to control the volume levels on their headphones themselves, while the engineer retains the control of the monitoring functions from the control room or even the play room while setting-up.

Surpassing most monitoring controllers, which offer one or two headphone outs, Satori features four independent headphone amps ready to provide several band members their own, unique input feed with independent volume control. Satori’s headphone drivers are audiophile-grade and are the same as those used in Antelope’s premium line of high-end home audio converters, able to drive both low and high impedance headphones.

A unique software talkback solution allows for instant communication with performers. Satori provides great flexibility by offering several kinds of talkback mic sources – via the built-in mic on the front panel or R4S; the 1/4” TRS connector on the rear panel or the built-in mic in the engineer’s laptop, and the mic on your phone when using the Satori App.

A brief overview of the TEC Award winning Satori monitoring controller – a summing system, combining hi-end sound, convenient remote control and flexibility. Monitoring control has never been as easy and intuitive as it's now with the Satori monitoring and summing system. The video showcases the versatility of the product and its multiple options for remote control, now even via a #MobileApp for Android or iOS devices. Satori is a true analog #MonitoringController and #SummingSystem providing uncompromising sound quality and accuracy through its advanced analog circuit design. Satori maintains sonic accuracy while routing and switching between source material, with the D/A handled by the clear and natural-sounding Antelope Audio converters. Besides outstanding monitoring capabilities, Satori features a fully analog 8-channel summing mixer, allowing you to achieve the analog warmth of classic mixing consoles while working “in-the-box”. The elegant front panel, which allows you to switch or adjust inputs and outputs, assign headphone monitoring for the artists and talkback from any corner of the studio, is now accompanied by a mobile application working with multiple devices. This means artists can now set the volume levels of their own headphones themselves, while the engineer retains control of the monitoring functions from the control room or the play room. Find all you need to know about the TEC Award winning Satori here: http://antelopeaudio.com/products/satori/ Never miss a post from Anetelope Audio: https://facebook.com/AntelopeAudio/ http://twitter.com/AntelopeAudio