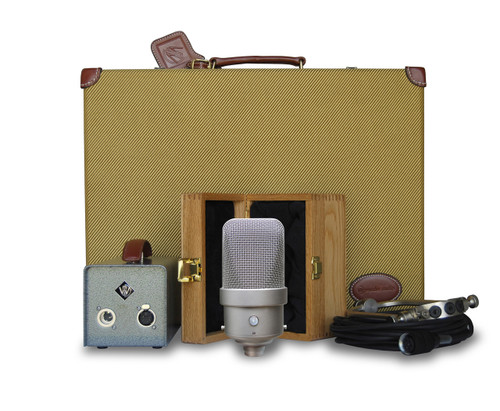 The Wunder Audio CM50 Suprema tube microphone is true to vintage using an original Neumann style M50 spherical capsule. The Wunder Audio CM50 S has an incredible lineage; its predecessor, the CM50, has been used worldwide in Decca trees for recording the soundtracks for many of the major motion pictures produced today. The Wunder Audio CM50 version is widely used by scoring engineer Shawn Murphy and Tom Steel amongst others at most of the sound stages in Los Angeles including; the Newman Scoring Stage 20th Century Fox, Sony Scoring Stage, Culver City, Newman Scoring Stage for both movies and television. It is favorite of Glee and The Glee Project and other top scoring stages worldwide, including Abbey road! Main left-right usage of the CM50 include: Star Wars: Episode VII - The Force Awakens, the Hobbit film series, Harry Potter and Marvel films. The new CM50 Suprema is one step up from this already perfect mic.

The CM50 S is the best available microphone for orchestral recordings because it has a response that rises slightly and it becomes increasingly more directional at higher frequencies when exposed to direct sound, but it remains flat in a diffused sound field.

In addition to being the perfect microphone for soundtrack recordings, the CM50

Suprema is definitely an important mic when recording drums and capturing the room sound, giving the instrument volume and depth. Once you try this out on drums, you will never want to record without it, as the drums sound flat without the CM50 Suprema.

Your Wunder Audio CM50 S is nestled in velvet and softly secured in place in a foam-lined quarter sawn oak box that is clasped and hinged. This box then is safely incased in a precision velvet-lined thick foam tweed case that also holds your PSU, your one-piece newly designed yoke mount, and your cables. The tweed carrying case is a work of art in itself; it uses the same Fender tweed found in a vintage fender guitar case which amplifies the vintage period of the vintage-style CM50 S microphone, and it is trimmed with top grain leather and fine stitching. The CM50 S case has a strong leather handle and combination lock to keep your mic secure. This case can be sold separately.