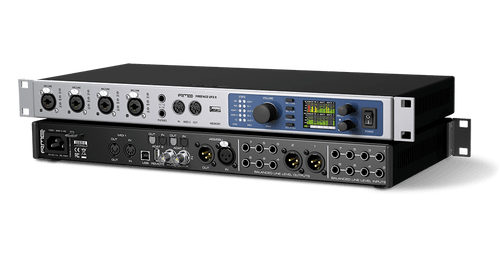 20th Anniversary Flagship Interface
The unique Fireface UFX II is the premier solution to transfer analog and digital audio data directly to a computer from practically any source.

With capacity for 60 audio channels (30 input and 30 output), support for sampling frequencies upward of 192 kHz, and the flexibility provided by USB connectivity, the new Fireface UFX II is an ideal solution to a wide range of recording, mixing, and monitoring applications.

The Fireface UFX II offers excellent flexibility that enables the interface to fit seamlessly into a myriad of production environments. Analog, ADAT, AES, SPDIF, and USB 2 are all standard on the Fireface UFX II. Equally impressive is the unit’s channel count: 12 analog, 16 ADAT, and 2 AES for 30 channels input and 30 channels output. Further, with support for USB 2 connectivity, the new Fireface UFX II can integrate with RME’s optional ARC USB remote controller.

Flexible Routing & Mixing with TotalMix FX
Since 2001, TotalMix has added unlimited routing and mixing to RME audio interfaces. Its unique capability to create as many independent submixes as output channels available, turned it into the most flexible and powerful mixer of its kind.

TotalMix FX can completely replace an external mixer, enabling the creation of multiple latency-free monitor mixes with EQ, Dynamics, Reverb and Delay for any outputs, incl. main monitors and headphone mixes for musicians.


ARC USB Remote Control - Plug’n Play Plus
The ARC USB connects to your computer via USB, and talks to TotalMix FX directly. It has 15 freely assignable and illuminated buttons, one encoder wheel, and a TS jack to connect a foot switch.

The ARC USB is a USB 1.1 MIDI remote control for the Fireface UFX II. Thanks to operating as a UAC 1 class device, it is natively compatible to Windows and Mac OS X. As soon as it is present in the operating system, TotaIMix FX will automatically detect the ARC USB, and communicate with it via simple MIDI remote commands to control the UFX+.


DURec (Direct USB Recording)
DURec is an integrated digital recorder for all inputs and outputs directly to USB memory devices via the front USB port. The Fireface UFX+ and Fireface UFX II records on USB thumb drives or hard drives with up to 2 TB capacity. The recording functionality is provided by the internal DSP, and is therefore independent from a connected Windows or Mac computer. The Direct USB Recording converts the Fireface UFX Series both into a stand-alone field recorder and a powerful multichannel live player for previous recordings, e. g. for virtual sound checks. Live concerts, band rehearsals or spontaneous jam sessions can be directly recorded and played back from the medium - even completely stand-alone without computer or software.