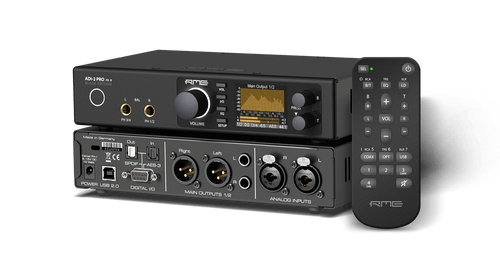 New Experience in Sound and Quality
RME’s reference AD/DA converter is a host of devices all put together into one unit, with a simple and mostly automated way of using it right out of the box. A unit with the industry’s biggest footprint per feature ratio, excellent tech specs, crystal clear and transparent sound signature, and two extremely powerful headphone outputs. The new ADI-2 Pro FS R Black Edition features the AK4493 chip, slightly improved specs and comes with the new extended Multi-Remote Control (MRC).

RME's anniversary reference AD/DA converter is:
A high-end AD/DA converter in professional studio quality
A double headphone amplifier in true high-end quality
A USB DAC like no other - the most versatile and capable one
A high-end AD/DA frontend and headphone amp for iPad / iPhone
A multi-format converter (AES, SPDIF, ADAT) with monitoring function
A DSD record and playback solution
An AD/DA frontend for audio measurement at up to 768 kHz sample rate

RME’s ADI-2 series comes equipped with a sophisticated and powerful Parametric Equalizer. Five EQ bands with different filter shapes give precise control over the complete frequency spectrum. The graphical interface is clean and shows exactly the EQ curve as well as a current output volume meter. Changes in volume by boosting or cutting frequency bands are therefore instantly visible. In this video we give you a short demo of what the EQ is capable of. Listen how gentle and smooth the Equalizer operates. There are no unpleasant artifacts, even at drastic settings. Headphones are recommended! --------------------------------------------- Make sure you subscribe to our channel: http://www.youtube.com/user/RMEAudio?sub_confirmation=1 Follow RME Audio on Facebook: http://rme.to/facebook Follow RME Audio on Twitter: http://rme.to/twnews