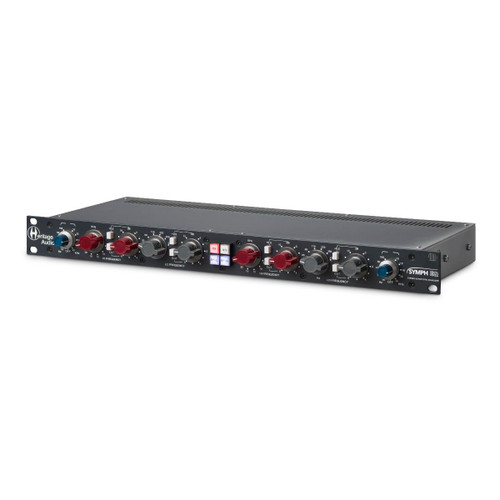 70 years after it’s creation, the Baxandall EQ gets a definitive update.

Baxandall equalizer’s topology, introduced to the public by Peter Baxandall in 1952, was a very ingenious way of obtaining high and low shelves with boost and cut option without using expensive rotary switches. This affordable circuit was soon adopted by hi-fi and console manufacturers for its simplicity, where parametric options aren’t needed.

Heritage Audio has successfully replaced the Baxandall topology with a functional equivalent — a much more musical one, implemented as a one rack space, master bus/ mastering type unit.

The Stereo Asymptotic Equalizer, affectionately known as Symph EQ, takes its name from the shape obtained by its shelf curves; where the boost or cut amplitude grows up until the asymptotic value is reached, keeping the ultra highs and sub lows always controlled.

Its sound can only be described as tight, sweet, and natural, and its use of parallel equalizing to obtain the desired response curves makes it to have exceptional low phase deviation and artifacts.

Shelving with surgical, but musical  precision.

This is where the magic lives.

The Symph EQ would have been an awesome sculpting tool just as it has been described above, but it turns into a monster piece with the following 3 additions:

It features the same exclusive Carnhill input transformers made in Oxford found in the Successor.

Its outputs are driven by 73-type Class-A output amplifiers, built with the same Carnhill St´Ives output transformers as the rest of the family.

Most importantly and, here is where the Symph EQ really shines, it has built in Mid Side (M/S) capabilities.

Nothing comes close to M/S equalizing a mix. It allows the user to process the center and the sides independently. The benefits of such processing are hard to believe. You can brighten your mix without making your vocals sound harsh, or even tighten the stereo-image’s bass content without making your bass or kick sound weak! This are just a few examples of the Symph EQ M/S power!

The response of the Side high pass filter has been made elliptical as in the vintage disk cutters for precise frequency response.