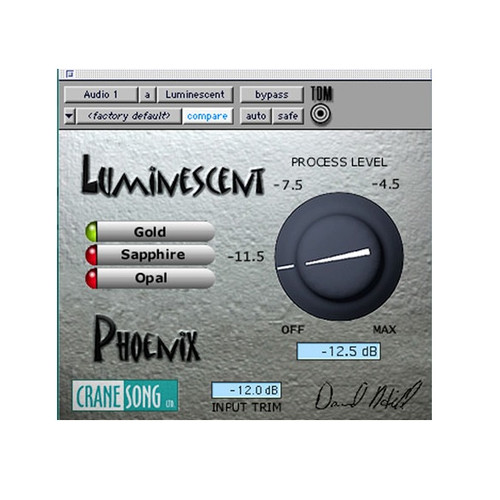 Phoenix I Software. Electronic Delivery Only.

PHOENIX is a TDM plug-in suite for Pro Tools HD that is designed to put analog color into the digital domain by increasing apparent loudness without increasing gain (e.g., by modeling analog tape compression). The result is that added realism that is missing in many modeled synths, EQs and digital samplers. The five different "flavors" of PHOENIX can result in a much more musical and satisfying sound.

Each one of the five different TDM plug-ins emulate different tape characteristics. Each one also incorporates a color change button allowing three choices to modify the process per plug-in. The Gold button is the position where the color is approximately flat in frequency response, with Sapphire being a bit brighter and Opal having a warmer tonality. A level control determines the amount of the PHOENIX process integrated into the audio signal, and an input trim determines "how hard you hit the tape." Because the DSP process is level dependent, reducing the input level will also cause a change in sound.

The input trim can also be used to prevent clipping in the rare cases where clipping may be a problem. This can be useful on material that is hitting close to or at digital zero. When the input trim is at 0dB, (no change in gain) and no tape process is being added to the sound, the plug-in is bit accurate, meaning the output exactly matches the input.

* Luminescent is the most neutral sounding process of the five.

* Iridescent has a similar magnetic character, but with a fatter bottom and midrange. This
plug-in is the most similar to the tape knob on HEDD-192.

* Radiant is characterized by a more aggressive compression curve

* Dark Essence is even more aggressive. (The effect is a color with a wider frequency
range--when used on a vocal Dark Essence can reduce sibilance problems by
increasing the apparent loudness of the rest of thesignal.)

* Luster starts more gently than the other four processes, but becomes as aggressive
as Dark Essence when the process is at full scale.


Running within Avid's multi-shell architecture, PHOENIX is very DSP efficient. It will run approximately twenty instances of a plug-in on a single DSP chip (an HD system running at a 44.1 kHz sample rate).

The PHOENIX plug-in suite provides a wide range of choices to make your digital world sound warmer, fatter, and more alive. The plug-ins can be somewhat subtle, but the cumulative affect when used on a number of tracks can bring back the warmth and richness which only analog recording has been able to provide.