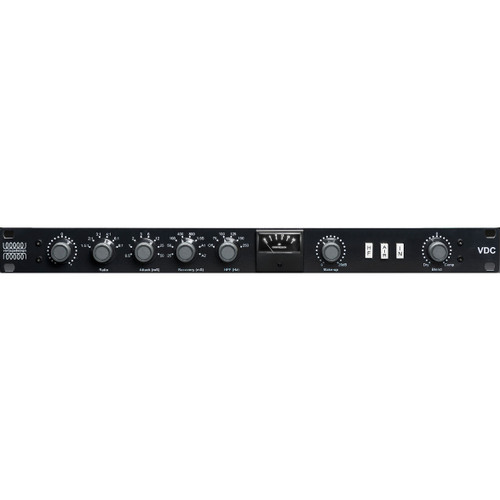 The Vintagedesign “VDC” is a brand new transformer balanced Class A design that uses a diode bridge as the gain reduction element. It is based on the old British 2254 / 2264 and our own C1/CL1mk2.

All controls are stepped – a “must have” for recall in mix and mastering environments.
A blend control allows parallel compression – always a desirable feature on any compressor. The VDC provides two types of HF boosts. The HF switch boosts the high frequencies with 2dB, affecting both the output signal and the signal that feeds the side-chain.
The AIR switch boosts the high frequencies on the compressed signal by 2 dB.
As with many stereo devices, the VDC has one set of controls for both channels.
The VDC uses two threshold detectors which are summed before the timing circuits to ensure maximum performance. Both channels hit the detectors even if they are 180 degrees out of phase.


Designed and built in Sweden, the Vintagedesign VDC stereo bus compressor is a classic in the making. Vintage sound and controls, old school look and a solid professional ergonomic feel are guaranteed to satisfy even the most discerning audio engineering professionals and enthusiasts.