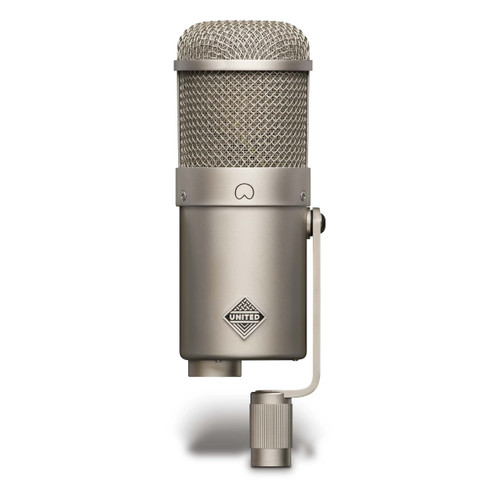 A classic reborn: The UT FET47 represents several years of R&D, blood, sweat, and tears — all to capture the essence of one of the most beloved and classic solid state condenser microphones, and recreate it for the modern recordist.

The UT FET47’s design started with a custom Cinemag transformer for an unparalleled response, warmth, and low-end. This is topped off with a custom Heisermann HZ-series capsule, created as a joint venture between United and Heisermann. But United didn’t stop there — they sought out vintage polystyrene capacitors and FETs just to get the right sound. Get your FET on, with the United UT FET47. It’s not just another mic — it’s a United.

It’s a labor of love. The UT FET47 represents several years of R&D, blood, sweat, and tears — all to capture the essence of one of the most beloved and classic solid state condenser microphones, and recreate it for the modern recordist.

The sonic qualities you’ve been chasing have arrived — at an accessible price, with uncompromised quality.

Custom parts. Vintage and new old stock parts. Mix that together with each microphone being built in the USA by actual recording engineers, and you have the UT FET47.

United worked with acclaimed capsule designer and manufacturer Eric Heiserman to develop a commercially produced version of his recently perfected German style dual-backplate K47 capsule. Eric worked with the United team and their capsule manufacturer to faithfully reproduce his capsule. This process required the analysis of everything from the sourced Mylar to the thread types of screws; but after many months and many iterations, they finally achieved what they had hoped for in the HZ Series capsules.

While many of the HZ Series design secrets will remain so, one superior attribute they can reveal is the use of dual, matched backplates. With the HZ Series matching process, a far more accurate and consistent quality from side to side and capsule to capsule is achieved.

The HZ series capsule is still manufactured only a few at a time, stringently listened to, and only are used if they meet both United and Eric’s expectations.

United auditioned many recreations of the original German transformer; but quickly settled on an exceptional offering from Cinemag Transformers in California. Their answer to the classic part is truly a piece of art; a large, hefty transformer made from a ‘striped core’ of interleaved sets of high nickel and steel laminations, and wound to the specs of the original.  It‘s humbucking design delivers clean, quiet operation.

While United could have used smaller or less expensive transformer; they simply refused to compromise. We believe you’ll be glad they didn’t.

It’s not just another mic — it’s a United.

Choosing the best microphone for your needs couldn’t be any more difficult these days. With so many options on the market, and so many claiming to have the vintage sound and failing to deliver, it can be overwhelming.

That was United's inspiration: deliver the real product — affordably. The UT FET47 represents United's true passion for microphones, and was built with a holistic-design approach. With over 50 years of combined industry experience, United have spent years on research and development on this microphone.