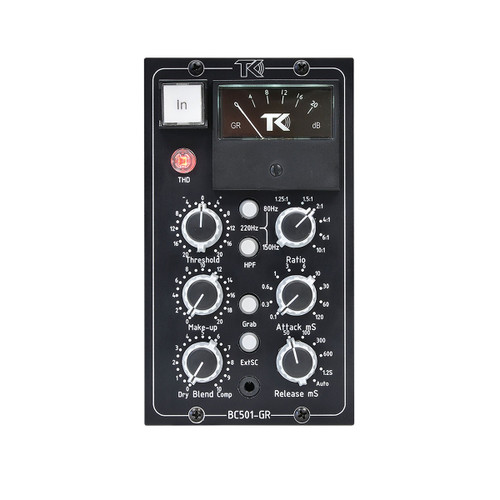 BC501GR Black 500 Series Stereo Bus Compressor. Since the BC501 was released in 2015 it has found its way into a great numbers of 500 racks all around the globe and now the new updated BC501 is here!

The smooth, soft compression together with the blend control, high-pass filter and the THD function are much appreciated features that now have been expanded with the grab function, known from the BC1-THD. The grab function turns the threshold knee harder and makes the compressor even more perfect for the drum-bus.

The BC501 will be released in two versions right from the start; The BC501-GR with the standard stock black panel. The BC501 is one of the most transparent stereo bus compressors ever made. It’s manufactured and assembled in Sweden and thoroughly tested before leaving the factory.

Specifications and components may be changed or updated without further notice.