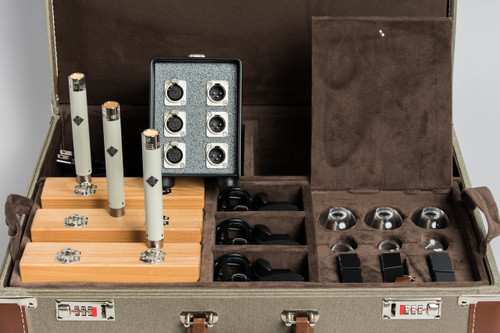 If you work in film scoring or classical recording, then you should know what a Decca Tree is. If you don't work in those disciplines, here is a brief synopsis of the Decca Tree [or "Tri-Mono"] recording technique.

Engineers who recorded classical music for Decca Records pioneered this microphone placement technique in the early 1950s when they wanted a strong sense of stereo image and balanced coverage of an orchestra, as the conductor might have heard while he led the orchestra.

In addition to orchestral recording applications, the Decca Tree configuration can be an invaluable component to more contemporary recordings for drum applications and to gain an overall "band in a room" kind of atmosphere to your recording process.

The most common Decca Tree setup employs 3x 1-meter bars from which the microphones hang in a triangle configuration; though larger and smaller bar sets can be used.

One of the problems often associated with the application of the Decca Tree technique is a loss of high frequency content due to the physics of how sound travels. The greater the distance a sound has to travel, the more high frequency information is lost due to the resistance of the air through which the sound must travel. Another problem that can be associated with this technique can be the capture of greater reverberant information than is often desired (due to the omni-directional capsules employed).

The addition of a diffuse field sphere is the most organic way to combat both effects; reducing the loss of high frequencies as well as minimizing the reverberant information. TELEFUNKEN Elektroakustik has made two different sized diffuse field-recording spheres available for the ELA M 260 series of microphones: 50mm and 30mm. The sphere is an accessory that attaches to the capsule end of the microphone, which effectively makes the microphone's diaphragm part of the sphere as the sphere changes the shape of the transduction capsule. The result is a gradual and smooth rise in upper midrange and high frequency information captured by the microphone.

The sphere increases the directionality of an omni-directional capsule by altering the acoustic surface area of the capsule to nearly infinite. Where an omni-directional microphone has (for all intents and purposes) 360° pickup capability, with the addition of a sphere, the frequency response of the microphone is increased in the 2 - 10kHz region of the audio by as much as 2.5 db in the front of the microphone (50mm sphere) while being simultaneously diminished by about 2.5db from 5kHz up from the rear of the microphone. The 35mm attachment gives a less pronounced effect, which may be preferable for smaller venues.

The TELEFUNKEN Elektroakustik TRI-MONO package for the ELA M 260 system consists of three ELA M 260 microphones [finished in black], a 3-channel power supply capable of powering all three microphones, three elastic shock mounts, and a set of three 10-meter AccuSound TX-7 tube mic cables with right angle XLR connectors. In order to foster an element of creativity, all three capsule systems [TK60 cardioid, TK61 omni-directional, and TK62 hyper-cardioid] are included in the package, along with a set of three 50mm and a set of three 30mm diffuse field spheres.