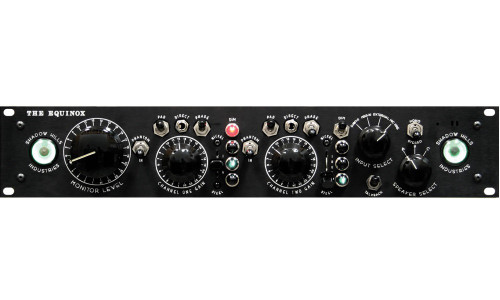 THE EQUINOX
Mic pre, summing mixer and monitor section all in one

(PSU NOT INCLUDED IN THIS LISTING. PSU IS REQUIRED. SOLD SEPARATELY.)

The Shadow Hills Equinox is like a complete small-format recording console in just 2 rack spaces. It features 2 GAMA mic preamps, 30 channels of analog summing, and a mastering-grade monitor controller.

Microphone Preamp
The mic preamps are the Golden Age Microphone Amps. Each has 60dB of gain, 24 position gold-plated stepped attenuators, 48V Phantom Power, 20 dB Pad, Phase Reverse, and 1/4” DI Input. The most exciting feature of the amplifier section is the switchable output transformers, which allow for several different sonic flavors in the same box. The transformers and characteristics are as follows:

Summing Network
The summing buss is a 30-channel mixer utilizing copper buss bars and esoteric resistors, for simply the finest sounding passive summing. DAW inputs 3-24 are STEREO summed and distributed odd to left and even to right, while DAW inputs 25-32 are sent MONO to both channels of the summing network. The summed signal then passes through the Golden Age amplifiers with selectable output transformers. Effectively allowing the user to choose between the sounds of three different consoles on the mix bus.

With the INPUT SELECT switch IN:
DAW 1-2 position the Equinox monitors the stereo mix output of the user’s DAW. In this mode, the incoming DAW 1-2 signal bypasses the GAMA amplifiers and feeds the Monitor Level control. This allows the user to employ the Equinox’s mic preamps standalone and record/monitor them through the DAW’s I/O.

MIX 3-32 position, the Equinox monitors the summing network after passing through the GAMA’s.

MIC PRE position, the Equinox routes the mic preamp output directly to the Monitor Section. This allows the user to monitor the signal coming directly from the preamp, prior to any converter artifacts or intermediate processing.

With all these features in a rugged 2U enclosure the Shadow Hills Equinox is equipped for the demands of modern recording, but styled and crafted to the high standards of a bygone era.