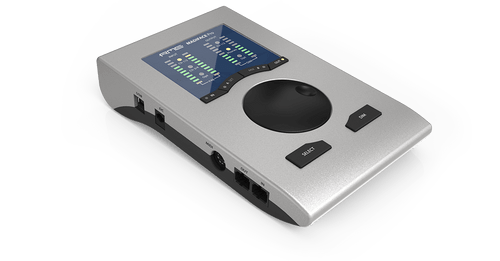 The RME Madiface Pro was launched to much industry acclaim. Now regarded as the new standard in high-end desktop recording, it’s superior sound, build quality and professional connectivity has made it the first choice for producers, engineers and artists everywhere.

Two analog mic/line XLR inputs, two XLR line outputs, two universal TS inputs for line or instrument, and 2 stereo TRS outputs for low and high impedance headphones provide everything you need to work on your projects in the studio or on the move. TotalMix FX adds 3-band parametric EQs and reverb/ echo, plus unlimited mixing and routing options. A MIDI I/O completes the fully DAW compatible feature set. The unit operates USB bus powered and usually does not need an external power supply, unless the MADI I/O is used.

The optical MADI I/O offers 64 input and out channels, and sample rates up to 192 kHz. It is fully supported in TotalMix FX, with the analog I/Os simultaneously available, resulting in 68 channels input and 68 channels output over USB 2.

To address the increased power demand, RME has implemented a delayed start of the MADI transceiver on power-up, and an option to temporarily disable it when not needed. The MADIface Pro includes an external power supply with lockable connector.