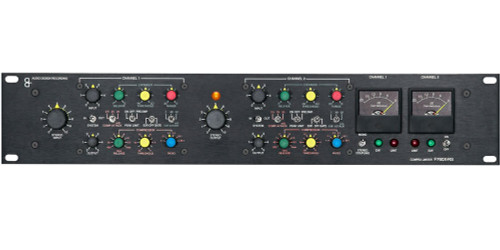 Functionally, the new Compex has all the same features and settings as the original unit, employing the same super-flexible FET-based compression, limiting and gating. Switchable threshold, compression ratio, and attack/release times are available with all the same settings and a stereo link switch is provided for linking the two channels together for operation in stereo. An all-new external side-chain insert has been added to the new Compex, letting you feed the detector circuit of the compressor with an independent sound source. The side-chain insert can be set to control the gate circuit, instead, by simply switching over an internal jumper. The limit section has a switchable 50us "pre-emphasis" setting in addition to the normal “on” position. Pre-emphasis was originally used for limiting high frequencies to prevent over-modulation during broadcast use. Pre-emphasis boosts the high frequencies entering the limiter side-chain, acting as a de-esser causing limiting action on sibilant high frequencies. The compressor side-chain insert is useful for adding an EQ to the side-chain audio signal to create "vocal stresser" type frequency-dependent compression effects or inserting another audio source for “ducking".

Improving upon some of the components and build-quality concerns of the original Compex, a high-quality meter has been employed (replacing the discontinued Sifam™ Director 14 meter) and the original “ABC” cards have been combined to a single PCB to allow for more efficient manufacturing. Also, some slight alterations have been made to the calibration functions to help the unit maintain calibration over a longer period of time. The original potentiometers were an open frame design which became noisy as time wore on, the re-issue has sealed conductive plastic potentiometers to improve the usable life-span.

With a wide range of features and functions, the new ADR Compex by Q2 Audio can meet the needs of any dynamic-processing task, adding a character and flavor all its own. Those familiar with the original Compex will be pleased to see how faithfully recreated this reincarnate really is, with a few enhancements and updates to make one of the best compressor/limiters just that much better.