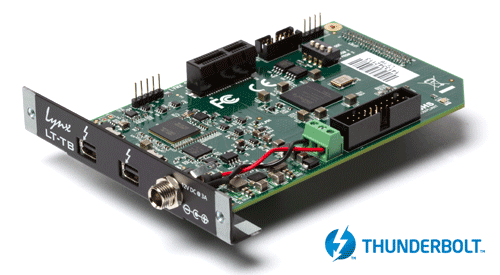 The LT-TB LSlot card can be installed into any existing Hilo or Aurora with an easy and free firmware update. In addition, Lynx is making Thunderbolt equipped Aurora and Hilo models available at the same time. These models are:

• Hilo-TB in Black and Silver

The LT-TB, in development for over a year, uses Intel’s Cactus Ridge second-generation Thunderbolt controller. This device allows for a more robust design electrically. Similar to other Lynx products, LT-TB incorporates an FPGA for audio mixing and control functions that can be easily updated in the field.

Months of in-house testing along with support from Apple and Intel assure that LT-TB works well with any other certified Thunderbolt product on the market.

The Thunderbolt protocol allows up to six devices and one display to be connected to the computer on a single Thunderbolt port. So in addition to Lynx converters, you can have external drives, displays, expansion chassis and so on. The LT-TB has two Thunderbolt ports, which allows this daisy chaining of devices.

Thunderbolt technology is the fastest connection to your PC at 10Gbs – in each direction, and at the same time. This is twice the speed of USB 3.0. Thunderbolt provides flexibility and simplicity by connecting up to six data and display devices in a daisy-chain.