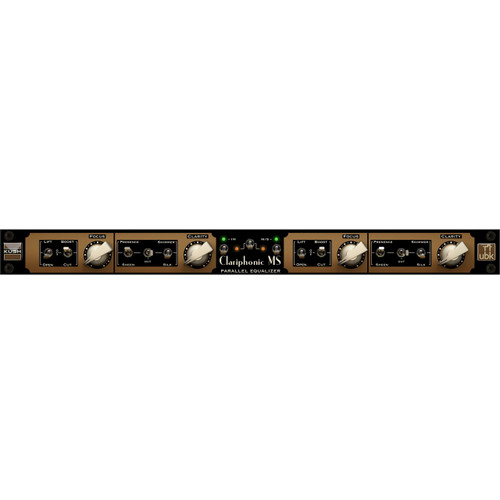 Clariphonic MS is the successor to everyone’s desert island mix buss processor: the Clariphonic EQ.   Featuring the same liquid sonics as the original, Clariphonic MS incorporates all of the most popular user-requested features, and is now so powerful it can extend the functionality of every piece of gear connected to it. The source of that power is a selectable internal Mid/Side matrix which allow the unit to independently eq the center and the sides of a stereo mix, enhancing the width of a mix as well as its presence and clarity.   Clariphonic MS can also convert an entire rack of conventional signal processors into an MS powerhouse by way ofthe Mid and Side insert jacks on the back of the unit, which allow any connected processor to function in MS mode as well. Other new features include 41-step detented pots for fast and accurate recall, a single-switch relay-based Master Bypass, and the ability to switch the midrange Focus bands into a Cut mode which softens and darkens aggressive upper-mids in a way that evokes the sound of analog tape.