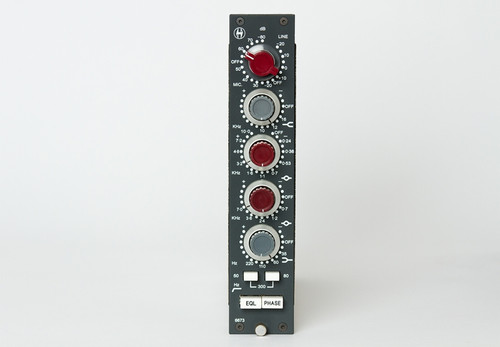 In March 1970 the first 1073 module was launched and became the standard in 80 series consoles. The 1066 was gradually replaced in newly shipped consoles and finally disappeared. The 1073 featured almost the same identical circuitry, being the most relevant differences the hi frequency shelving ( 12Khz instead of 10Khz ) and the equalizer´s mid band, which had one more center frequency, but lacked the constant Q of the 1066 . Vintage module connoisseurs do know how sweet the 1066mid band sounds and, for some, something was lost in the way. Until now...
The 6673 module is the answer to an old question among vintage module users. Should I use a 1073 or a 1066 for this specific source material? Should I need to boost at 700 Hz or would it be better to cut at 360 Hz? Should I need 12Khz or would it probably better to add 10Khz instead?
These and a lot more questions that have become "classic" in some professional environments have a new answer.

Heritage Audio is proud to introduce the 6673 module. A 100% series 80 compatible module featuring the same Class A mic preamplifier found in the classic modules with an added key feature: A 4 BAND EQUALIZER. Better said, THE 4 band equalizer as it features the same exact 3 band equalizer circuit found in the famous 1073 plus the mid band found in the 1066.
In addition, we have expanded the 1073 mid band with 3 extra frequency choices, widening the sonic palette.

BAE Audio and AMS-Neve are registered trademarks of their respective owners, and Heritage Audio is in no way affiliated with any of them