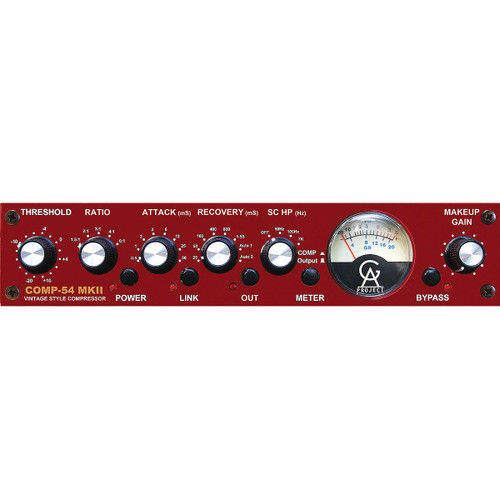 The only difference between MKI and the new MKII is that the MKII has an insert jack where you can insert one of our eq units.

The COMP-54 is a one-channel vintage style Compressor. The signal path uses only discrete components like resistors, capacitors and transistors. The line input and output are transformer balanced and the unit also has a third interstage transformer.

This is the way audio components were built before integrated circuits became available. IC´s are small and cheap and they are widely used in most modern designs. It is clear though that audio components built with modern technology doesn´t always provide the best perceived sound quality or character that the modern user desires. On the contrary, the subjective sound quality delivered by vintage equipment is often prefered over the one delivered by modern units. This is the reason why so many vintage audio components are cloned and produced again and also why the vintage originals are often very expensive on the second hand market.

The class-A circuit used in the COMP-54 is similar to the one in the classic 2254 compressor that was designed in 1969. It quickly became a legend due to it´s totally unique sound character that is warm, smooth, sweet and musical. These characteristics have been heard on countless recordings through the years and it is a versatile sound that works very well on most sound sources and in most genres. The essence of this sound is now available at a surprisingly low cost, making it available to nearly everyone.

The COMP-54 uses a diode bridge as the gain control element, a method that is revered for its smooth way of operation. Some of the most sought after vintage compressor designs, like the 2254, 2264, 33609, Siemens™ and EMI™ used the same basic design.

The controls in the COMP-54 are very flexible covering broad ranges of Ratio, Attack and Release times, including two Auto positions. All controls except the Gain make-up one are stepped for easy resetting and stereo matching.
There are three selectable sidechain high pass filter frequencies available to handle special situations.
The Bypass switch is a true bypass where a relay switches the complete circuitry in or out. The IN/OUT switch makes it possible to switch the compression on and off while retaining the coloring from the transformers and the electronic circuitry.

The meter can show output level or gain reduction. It is also possible to link two units for stereo operation.

– Vintage style electronics.
– Based on classic diode bridge designs.
– Transformer balanced I/O´s.
– Prepared for transformer upgrade.
– Flexible control range for Ratio, Attack and Release.
– All controls except the Gain make-up one are stepped.
– Three selectable Sidechain filter frequencies.
– Separate Bypass and Compression IN/OUT switches.
– Meter selectable for Output and Gain Reduction.
– Possibility to Link two units for stereo operation.
– Separate in- and output XLR and TRS jacks for flexible connections.
– Back panel switch for 600 Ohm termination.
– External power power supply to avoid interaction with the audio circuitry and the transformers.
– Great sound that suits most sound sources and genres.
– A solid build quality that will last many years of normal use.

“I just sent the overhead tracks with a lot of woodblocks and other percussion laying on the snare and toms of one piece of the new cd through the comps. AMAZING sound and a very helpful tool also for tracking, because sometimes i get situations, where I hit cymbals closer to the mics harder and the other parts of the same piece are at a lower level. So I can cut the peaks a bit and still have good levels for the rest. Of course one can do this with any compressor, but these sound extremely warm.Cool”
Georg Hofman, Switzerland www.georghofmann.com

“Awesome unit and sound with alot of good controls – you really nailed it with that one!”
C.N, Switzerland

“Just slapped the Comp54 on the drum bus of a mix and holy cow!!!! Big, Thick, Warm, Juicy and Punchy! This is a bad ass compressor. We’ll be shooting and all GAP episode of FullOnDrums.com this weekend so look for it in the next couple of weeks.”
C:W, US

Adding an insert jack to the COMP-54 MKII

This quite easy to do.
There is a capacitor on the input of the output stage, C27 (a light brown tantalum cap).
You just lift the input pin of this cap (the one facing the front panel) and insert the cables to the insert jack in the signal path there.
You remove the Output TRS jack from the circuit board and turn the jack 180 degrees so that you can solder cables on the pins. Tip goes to the input pin of the C27 cap and ring goes to the point on the pcb where the input of C27 was soldered earlier.