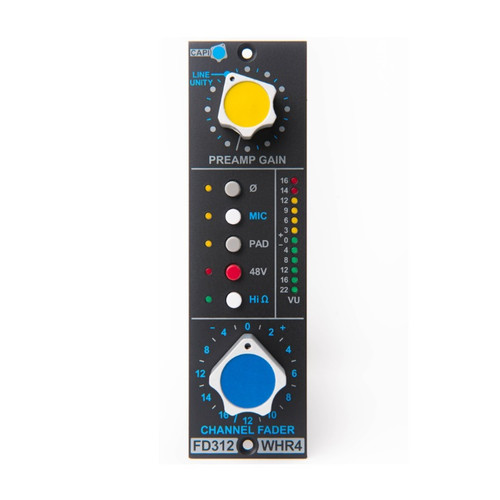 The Heider FD312 is a special and unique preamp module that stands out in today's crowded 500 series market. The preamp stage has been carefully modeled after the preamps in the famous Wally Heider Recording Studio 4 console custom built by Frank DeMedio circa 1972. The original pre's were stock 312 cards modified by DeMedio. Frank removed the AP2622 input transformer and replaced it with a custom wound Ed Reichenbach RE-0887. The RE-0887 has a very special tonal quality with some of the most buttery smooth mids you will ever encounter! CineMag owns Reichenbach Engineering and continues to manufacture all of the original designs to original specifications. CineMag has done a fantastic job with the current RE-0887's, working straight off of Ed Reichenbach's original notes and winding data from 1972. For those who don't know, Ed Reichenbach's son Tom went on to form CineMag in 1979 after working with his father for some 25 plus years. After Ed passed away, David Geren and Tom Reichenbach bought Reichenbach Engineering to continue the legacy. I am so very glad they kept all of the old notes!

To enhance this special preamp circuit even further, I chose to employ a stepped 'fader' and active booster stage, very reminiscent to my popular 2-stage VP28 preamp. This is essentially the same booster circuit that was used in the early to mid '70's vintage API consoles. In remaining true to the Heider circuit, all AC coupling capacitors have been removed from the audio path. I don't think coupling caps are evil, they are just not needed in this particular circuit. This fader booster stage has 12dB of gain 'in hand', exactly like a real console. This allows for many different gain combinations. You can crank the fader and reduce the preamp gain or in contrast, attenuate the 2nd stage and crank the preamp gain for some sweet, additional harmonic content.

The original Heider/DeMedio preamp cards used stock AP2503 output transformers. With the desire to have something unique, I was luckily able to persuade David Geren, owner of CineMag, to think about that transformer and create something different while retaining the sonic characteristics I was after. Out of his effort the CM-3301 was born.

In trying to be loyal to the console signal path, both gain stages have a CM-3301 output transformer. The first or preamp stage output transformer provides +6dB of gain, blocks DC from the stepped fader and imparts a little more character into the overall circuit, as compared to a 'direct' output.

The operational amplifiers are the pure heart of any preamp like the Heider FD312. I naturally wanted to stay as close as possible to the discrete Studio Systems opamps from the early '70's. In a current commercially available product, Scott Liebers' SL-2520 Red Dots were a no-brainer choice. As most of you already know, they perform and sound outstanding all while having a very long life expectancy due to their un-potted construction. Each Heider FD312 contains two of these glorious Red Dots.

Each and every Heider FD312 is hand assembled, burned in and tested at CAPI headquarters in Nashville Tennessee.

In MIC mode, the stepped PREAMP GAIN ranges from +22dB to +57dB, with an input impedance of 167 ohms.

In LINE mode (MIC pushbutton out or disengaged), the stepped PREAMP GAIN ranges from -14dB to +21dB, with an input impedance of 9K ohms.

Engaging the Hi Z pushbutton in MIC or LINE mode will increase the gain by 3dB. In MIC mode, the resulting input impedance will also be raised to 300 ohms. Since the upper ten PREAMP GAIN steps are also in 3dB increments, this allows for many creative tonal combinations.

The stepped CHANNEL FADER switch and 2nd stage booster amp provide a range of -16dB to +12dB in addition to the above-mentioned preamp gain ranges. This equates to a maximum gain of 69dB when in MIC mode and 72dB when in MIC mode with the Hi Z pushbutton engaged.