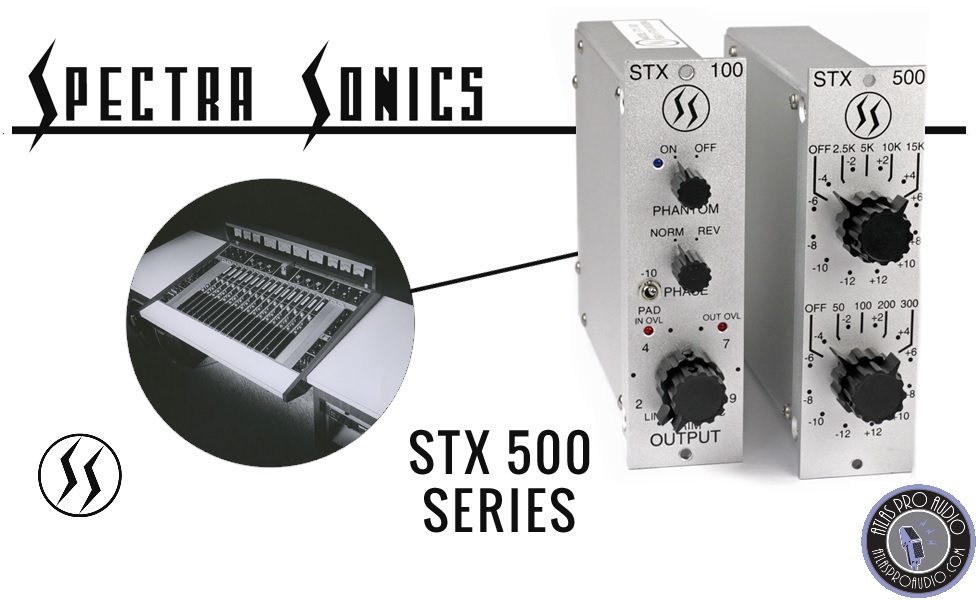 THE AMERICAN SOUND COMES BACK AROUND

The studios of Stax, Ardent, the Record Plant, MGM, A&M, Advision and Atlantic produced some of the most influential records in the history of recorded music. There is no doubt you've heard them yourself. From John Lennon's Imagine to Bruce Springsteen's Born to Run, and (Sittin' On) The Dock of the Bay by Otis Redding to Toys in the Attic by Aerosmith, there was a common thread sewn through all these legendary recordings – the sound of Spectra Sonics.

Spectra Sonics manufactured the amplifiers and equalizers utilized in the consoles of all these famous studios. The Spectra Sonics sound is unmistakable. Defined highs and robust lows, rich with harmonic content, and impactful dynamic range. Spectra Sonics is proud to re-release the circuits that played such an integral role in music history.

The STX 100 represents an affordable alternative for employing the same Spectra Sonics technology of our famous recording desks made over 40 years ago. The unique circuit topology of the STX 100 utilizes a 100 series discrete preamplifier design that was at the heart of every console built by the company. The result is unequaled performance in terms of expanded dynamic range, (headroom), low noise and distortion, as well as extended harmonic content of the amplified signal.

Most, if not all, conventional analog audio amplifiers live in a world whereby dynamic range limitations are dictated by audio program peaks. Audio program peaks, which can average 6dB to over 20dB, effectively reduce the undistorted output of a given amplifier by that peak to average ratio. The reduction in output limits headroom, (dynamic range), increases numerous forms of distortion, and limits the harmonic content of the amplified audio signal.

The STX series lives in the VU world, irrespective of peak to average transient audio program signal material. When a percussion instrument is the source, it is not uncommon to measure transient peaks that are 12dB-24dB above the program material average. Again, the STX series products are not affected by the high transient peak excursions. The first and second stages of the STX 100 utilize independent LED overload indicators to monitor program overload conditions. The result is faster set-up time with consistent and definable results. Drums sound like you are positioned next to them. Guitars have full harmonic content. The dynamic range of vocals is preserved.

STX 500
The STX 500 is the rebirth of the Model 500 2-band passive equalizer. The STX 500 has four frequency selections per band and up to 12dB of boost/cut in 2dB increments. This passive EQ becomes the active feedback element of the STX 100 amplifier. Combined with the STX 100 there is zero insertion loss and introduces virtually zero distortion when boosting or cutting.

PLEASE NOTE: The STX 500 is designed to connect directly to the STX 100 preamp. The STX 500 has no VPR edge connector of its own to plug into an API-style rack. Therefore it cannot be used in a standalone configuration.

The STX100 is available at Atlas Pro Audio: